Get off the damn computer, and play with your TV, it misses you!

WHAT TO EXPECT FROM SONY'S NEXT-GEN PLAYSTATION

Not too many details at this point:
- Improved CPU/GPU (duh)
- 8k support
- New 3D audio
- SSD (speedy!)
- Will support physical media
- Backwards compatibility with PS4
- Supports existing PSVR (Don't need to invest in new hardware although I'm sure a PSVR 2.0 is planned)
- Not releasing in 2019 (I've always predicted November 2020)


Sony won’t cop to exact details about the SSD—who makes it, whether it utilizes the new PCIe 4.0 standard—but Cerny claims that it has a raw bandwidth higher than any SSD available for PCs

Poor PCs.
Have You Hugged An Iksar Today?

Too bad the options will probably be either high res streaming from the cloud or high end PCs. Existing PSVR is ancient so I suppose that's nice for those that like nostalgia but Sony better have a much much better PSVR 2.0 in the works. I saw somewhere that PS5 would support ray tracing...that's interesting because even the $800+ 2080 card struggles to get 30 FPS on the handful of games out there. Sounds like a gimmick is PS5 includes it.

No chance in hell PS5 will handle 8K save for some sort of limited upscaling.

Streaming now handles backwards compatibility except for the few people that haven't figured out the digital age yet.

It comes down to the few exclusives Sony will have which are getting fewer and farther between each year as Microsoft sucks up gaming companies.

While Sony has dudes playing flutes on stage at their E3 putting fans to sleep (when they bother to show up at all), Microsoft is doing cool shit like this.

Microsoft said today that it will partner with Sony, its chief rival in the gaming console space, on “new cloud-based solutions for gaming experiences.” It’s unclear what exactly the new collaboration will ultimately lead to, but the move is still a surprising one given that the companies’ Xbox and PlayStation console lines are market competitors.

“Under the memorandum of understanding signed by the parties, the two companies will explore joint development of future cloud solutions in Microsoft Azure to support their respective game and content-streaming services,” Microsoft said in its press release. “In addition, the two companies will explore the use of current Microsoft Azure datacenter-based solutions for Sony’s game and content-streaming services.”

In other words, it’s entirely possible that PlayStation 5 might feature cloud gaming powered by Microsoft Azure, and beyond that, Sony and Microsoft might pool their resources to create a customized streaming solution that would be used by both Xbox and PlayStation.

“Excited about the opportunities ahead with Sony for us to pursue our mutual gaming ambitions and delight players around the world,” the head of Xbox, Phil Spencer, tweeted about the news.

The move comes hot on the heels of Google’s entrance into the game console market with its cloud-only platform Stadia. The move could be prompted by the console business’ entrenched players looking to team up to better defend themselves against Google. (Sony did not immediately respond to a request for comment. A spokesperson for Microsoft declined to provide further comment.)

Beyond that, it’s far from clear what this will mean for gamers. The language of the announcement is vague, and a memorandum of understanding isn’t necessarily legally binding. While it’s a statement of intent, it might not end up leading to anything significant.

Last October, Microsoft announced Project xCloud, a video game streaming service aimed at making Xbox One games playable across computers, phones, and tablets. Meanwhile, Sony already has PlayStation Now, a service that allows people to stream games to a PS4 or PC. It originally seemed like these services would be competitors. That still could be the case. However, this new collaboration also means they could in the future share some of the same technological DNA.

“Our mission is to seamlessly evolve [the PlayStation platform] as one that continues to deliver the best and most immersive entertainment experiences, together with a cloud environment that ensures the best possible experience, anytime, anywhere,” Kenichiro Yoshida, president and CEO of Sony, said in the press release. “For many years, Microsoft has been a key business partner for us, though of course the two companies have also been competing in some areas. I believe that our joint development of future cloud solutions will contribute greatly to the advancement of interactive content.”

Looks like Microsoft found a way to make money off of Sony! Seems like effort to counter Stadia which looks to be a solid streaming service.

Sony should just give in and partner with behemoth Microsoft and they can combine to produce the "Sony X-Box" or "Microsoft Playstation"....or "Playstation X"

At least Sony saw the writing on the wall and partnered with Sony for streaming. No way they would have had the capability themselves. In return for use of their cloud services, Sony's "exclusives" will be available on X-Box

A Deeper Look at the PlayStation 5. A few more details but nothing really new other than the name and release date. Two things most people already predicted.

The name will be Playstation 5 (duh. keep it simple unlike some other companies out there) and will release holiday 2020 (also a duh).

A rendering based on what the current dev kit looks like (assuming it doesn't red-x).. Dev kit doesn't mean final look so I will reserve judgement for now! 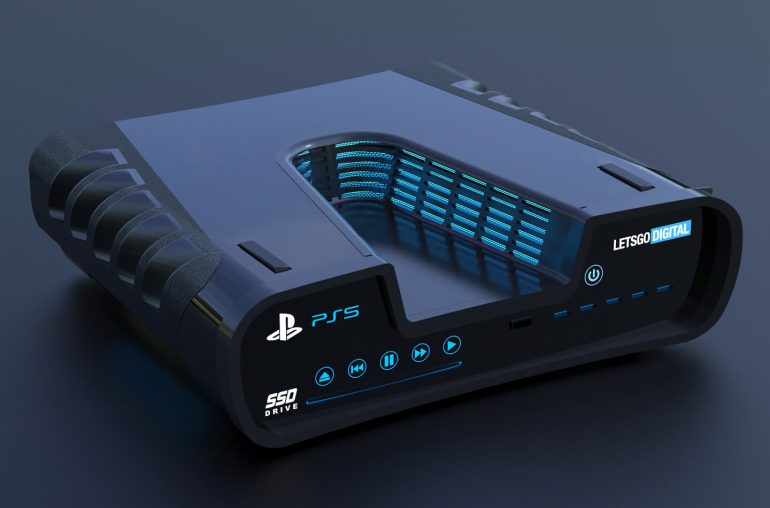 Have You Hugged An Iksar Today?

They emphasize the SSD a lot but that's a no brainer. We've had that for years on the PC and the new Xbox will have it as well.

Ray Tracing, etc. Already have that on the PC if you have a newer graphics card.

I bought PS consoles (mostly so I can complain about them!) and Xbox consoles day one up to this generation. I may do so again even though I haven't used my consoles for years with the sole exception of Persona 5.

So far, it appears neither PS5 or Xbox Best will have VR headsets at launch. Both have been mentioned to have them in the works. If one of the two turns out to have a compelling VR solution I will probably buy it but the Oculus Quest, now that you can connect it to a PC (starting in November with simple USB-C cable) and play all power intensive VR games as well as use it wireless for the rest of the games and media, is a very nice $399 package.

I have an Nvidia 2070 and 5.5 TB worth of SSD storage on my PC. The best solution may be to just spend a few thousand on my PC. Maybe one of the new under $1K 18 core Intel chips coming out next month, new motherboard and probably time for a new case that actually has working fans and doesnt weigh 50 pounds like the Antec 180 I 've had forever.

PS5/Xbox Best is still a good option for those that don't have, or don't want to invest the time to build a nice PC.

Xbox 360 was still way ahead of it's time focused on downloads instead of hard copy games. Everything has moved in that direction, Games, Movies, Streaming, etc etc. When it comes to online (Xbox Live, networks, cross play etc,) Microsoft has always been ahead of Sony. We'll have to see what game streaming solutions they both offer this next generation.

One thing is for sure. The Xbox controller will still be the best! (not even counting the way better Xbox Elite controllers)
Top

Do you ever read your posts before (or after) you submit them? This is more rambling than a Trump tweet.

Not only that but this is a PS5 thread. Why leave a post that is 75% Xbox/PC related?
Have You Hugged An Iksar Today?

That rant was created on a PC!

Not sure if Sony realizes the evolution of VR equipment is much much faster than the 6 year console releases. They are using WWII technology snow cone controllers that are older that even the first VR headset right now. If they put out a decent VR headset but try to make it a budget one, they'll be unbelievably far behind the tech curve 3-4 years from now.
Top

Looks like paddles will be on PS5 controller. Now all they need to do is switch their joystick layout that they've known is better for 3D/FPS games the past 15 years yet made their users suffer over their need for aesthetics.
Top
Post Reply
8 posts • Page 1 of 1