Get off the damn computer, and play with your TV, it misses you!

People need to get over the size. It designed that way for a reason. Is it big? Sure. If that keeps the console quiet and cool over the long run then it's worth it. If that doesn't end up being the case then yes that will be a gigantic fail. I marveled at its greatness before putting it behind the TV and that's where it will sit and I'll not give it much of another thought going forward other than whenever I put a disc into it.

There is an issue some people are running into with the download queue. Easy way to not run into it, and I haven't so far, is once you update the firmware during the setup just do the a factory reset before configuring and installing anything. I did hear people mention that, and I was going to do it with mine. but I forgot.

My main problem now is getting the DS5 controller to work in Steam. They added initial support for it in the beta client a couple days ago but for me it only works in the configuration screen but not in an actual game which makes it pretty worthless. That just might be a me problem. I have a bunch of HID controller items in Device Manager so I might just delete those.
Have You Hugged An Iksar Today?

I'd post a review but honestly I haven't used it for much other than playing Genshin Impact. Which is a much better experience than on the PS4 due to slow loading times and generally sluggish performance there.

I did try out Astro's Playroom but only have an hour or so in that but it seems fun. I really liked Astro Bot Rescue Mission on PSVR.

My hands might be broken because I think the haptic feedback is a bit overblown. Everyone says you can tell what surface you're walking on in AP and I'm like... Can you? I can't. The bigger issue, not Playstation related at all, is rumble has started to hurt my hands. Even if I play a game for only an hour it starts to bother me, especially at night when I go to bed or wake up, so I've had to start turning off rumble in games. And as haptic feedback is basically just fancy rumble I'll probably be turning that off as well. That's the main reason I haven't played AP that much. Getting older sucks

For me where the cool stuff happens is with the adaptive triggers. To me those seem like something new. Hopefully these aren't flimsy and will hold up in the controller over the years. The sticks in the DS4 are notoriously bad. I have gone through like 5-6 controllers in the past 6 years or however long the PS4 has been out. A lot of issues like the triggers not working reliably or L3/R3 failing. Someone said the stick modules in the DS5 were the same as in the DS4. Hopefully that is not the case and they got some upgraded ones in there as I don't want to be spending $70 on a new controller every 6-8 months.

Some have reported issues with the Rest Mode feature but that hasn't been a problem for me. But, again, I am not really playing any PS5 specific games that I put into Rest Mode. The only main issue I ran into was that the DS5 didn't work once in Remote Play and I'm not sure why not.

Speaking of Remote Play.. Not sure what's up with this but with the PS4 the clarity was great. Sometimes on the PS5 the quality looks like it is being compressed and looks muddy. No idea why that is the case since I have a wired network and both consoles were set for 1080p.

One thing I truly hate is the new Trophy layout. This is terrible! If you don't care about trophies it won't bother you but my god it's bad. They are listed horizontally now rather than vertically and it fits like 5 on screen at once and you can barely see the description of each one. I have no idea what they were thinking with that.

I think Folders might also be gone? I'm not sure why companies go backwards on some things. Hopefully it's just a matter of them not having the proper development time and they can get things like that added before too long. It's not a huge deal for me but I know some used it a lot. I don't think I ever created Folders on my PS4.

As far as size goes, yes it's large but it doesn't bother me. Even if it did it's sitting behind the TV and as I play a lot of stuff via Remote Play it's not like I see the actual console very often. The largest surprise to me was probably that it's not as white as it looks in the pictures. I was thinking it was snow white but it's got more of a slight grey tinge to it. It is obvious when you look at the PS5 box but from just the promotional materials I thought it was more white than it is.

I probably should have sold it on ebay for $1500 and picked up another one in 6 months when they will be in stock everywhere. That would have been the financially smart decision but it's fine. It's worth it just for speedier Genshin playing! I am lucky that I was able to snag one from the Sony store invitation because if it wasn't for that I doubt I'd bother trying to get one at this time. Those fuckin bots are out there cleaning out everything: PS5, Xbox, all the new video cards... That shit is ridiculous. And retailers don't really care as they are selling the product regardless. It definitely sucks out there for people who just want to buy a product and only pay retail for it.
Have You Hugged An Iksar Today?

Even more in demand than toilet paper!
Have You Hugged An Iksar Today?

Aslanna wrote: ↑December 4, 2020, 8:05 pmI probably should have sold it on ebay for $1500 and picked up another one in 6 months when they will be in stock everywhere. That would have been the financially smart decision but it's fine.

Glad I didn't do that... 7 months later and they are still scarce.


Sony has sold 7.8 million PlayStation 5 consoles as of March 31st, the company says in its latest earnings report.

Not bad considering the component shortage and other general shitty aspects of the world at the moment. Sony have to be fairly peeved that they can't manufacture enough of these to meet demand.
Have You Hugged An Iksar Today?

Still scarce! I'd say if people want one, and don't want to be constantly checking store sites, the less stressful thing to do is sign up on the PlayStation Direct page. In a few months you'll probably get an invite for purchase.

Also, since the VR thread was removed in the board upgrade, I'll post the PlayStation VR2 info here.


Building upon our innovations from PS5, PlayStation VR2 adds a true next-gen experience with high-fidelity visuals, new sensory features, and enhanced tracking – along with a simplified single-cord setup.

Visual Fidelity: For a high-fidelity visual experience, PS VR2 offers 4K HDR, 110-degree field of view, and foveated rendering. With an OLED display, players can expect a display resolution of 2000×2040 per eye and smooth frame rates of 90/120Hz.

Headset-based Controller Tracking: With inside-out tracking, PS VR2 tracks you and your controller through integrated cameras embedded in the VR headset. Your movements and the direction you look at are reflected in-game without the need for an external camera.

New Sensory Features: PS VR2 Sense Technology combines eye tracking, headset feedback, 3D Audio, and the innovative PS VR2 Sense controller to create an incredibly deep feeling of immersion. Headset feedback is a new sensory feature that amplifies the sensations of in-game actions from the player. It’s created by a single built-in motor with vibrations that add an intelligent tactile element, bringing players closer to the gameplay experience. For example, gamers can feel a character’s elevated pulse during tense moments, the rush of objects passing close to the character’s head, or the thrust of a vehicle as the character speeds forward. Additionally, PS5’s Tempest 3D AudioTech makes sounds in the player’s surroundings come alive, adding to this new level of immersion.

Eye Tracking: With eye tracking, PS VR2 detects the motion of your eyes, so a simple look in a specific direction can create an additional input for the game character. This allows players to interact more intuitively in new and lifelike ways, allowing for a heightened emotional response and enhanced expression that provide a new level of realism in gaming.

No word on release date or price but I'd imagine fourth quarter 2022 for $400.
Have You Hugged An Iksar Today?

Yeah, after several frustrating attempts to purchase one elsewhere including one time I got one purchased at Target and then got an email 3 hours later saying they actually didn't have one for me, I signed up for this. The way they do the invite/queue system is something that should be used a lot more, it was a super smooth process and I had my console 2 days later.

I will most likely get the PSVR2. I know it's not the best VR headset out, but it sounds like spec wise it's going to be good enough, and I"m not likely to ever have a computer that I could use better headsets with. I think your guesses on price/release date are probably about right.
Top

From what I can tell, spec-wise, it's one of the best out there at this time (although it's not out.. but you know what I mean). Interesting that the PS VRs have had OLED while the others have not. 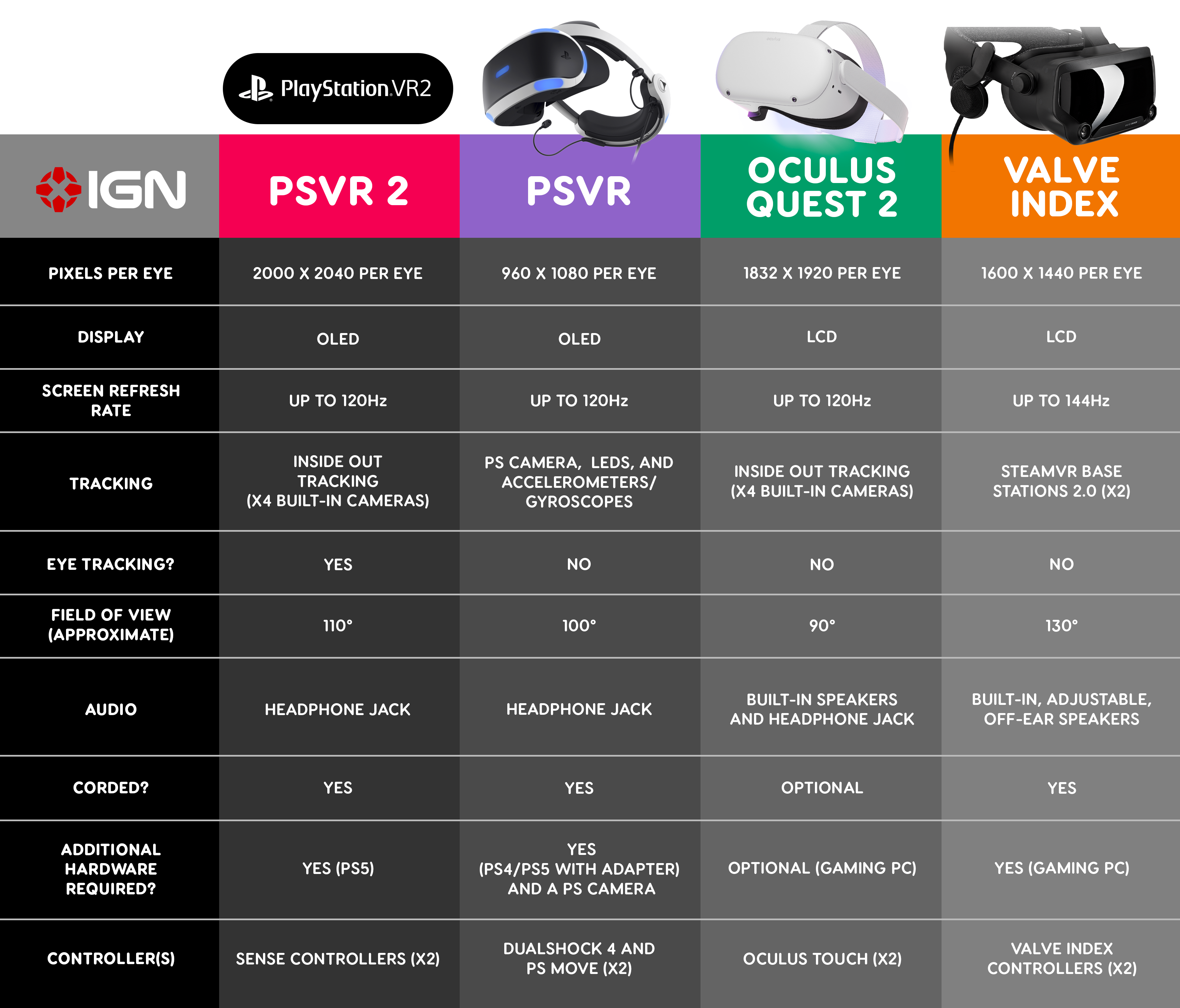 People are complaining about the cord but it doesn't bother me.

Hopefully it will be compatible with the first-gen PSVR games but there's been no announcement on that as far as I know.
Have You Hugged An Iksar Today?

The PSVR2 looks promising although the comparisons are to old tech that's been around for quite awhile now. Unfortunately I use VR for viewing TV shows and movies quite a bit and like wireless so it won't be of any use to me. Being corded is a major pain in the ass when it comes to VR.

At least the PSVR2 will finally have updated controllers.

I use my Quest2 almost every night but rarely for gaming. Hopefully PSVR will have something similar to Skybox VR player where you can watch any videos you want. Still wouldn't be great for watching movies on a massive screen while in bed due to requiring it be wired but at least it would be something.
Top

Winnow wrote: ↑January 13, 2022, 12:16 pm The PSVR2 looks promising although the comparisons are to old tech that's been around for quite awhile now.

True. But you can only compare things that have been released or announced.
Have You Hugged An Iksar Today?

Winnow wrote: ↑January 13, 2022, 12:16 pm The PSVR2 looks promising although the comparisons are to old tech that's been around for quite awhile now.

True. But you can only compare things that have been released or announced.

Also true, but eye tracking, higher res, etc is in the works with the major players. I'm not knocking PSVR2, it's a monster upgrade to the original PSVR both in visuals and definitely in controllers.